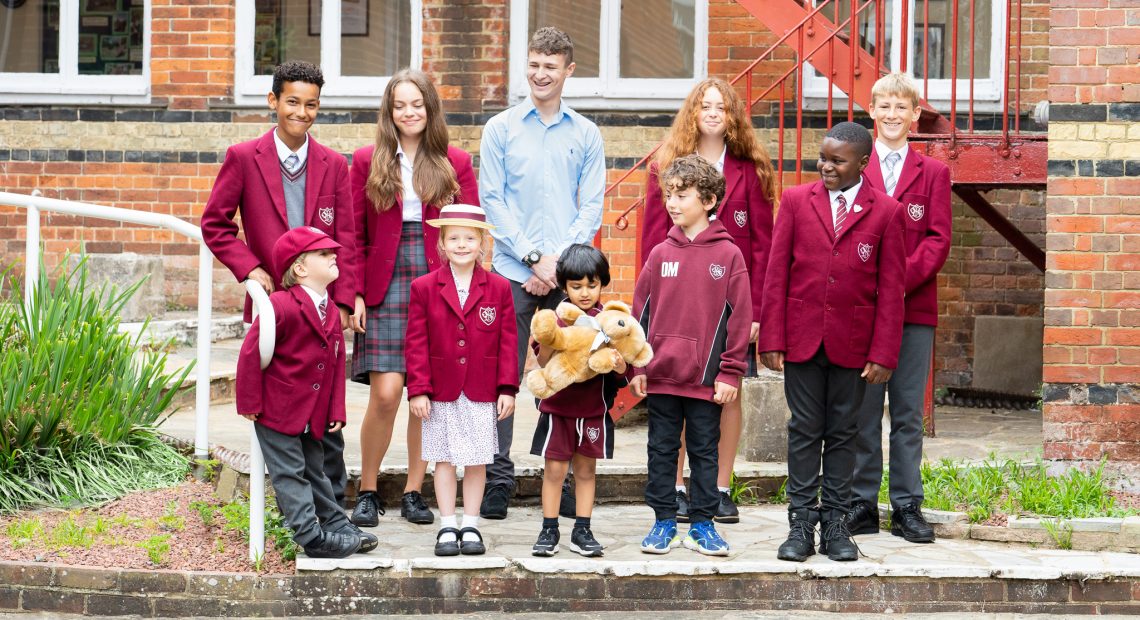 Our Lady of Sion > About Us > Governors

Mrs Katherine Henwood has been a Governor at Our Lady of Sion School since 2004 (and was previously Vice Chair).  She is a qualified Solicitor and has 3 children. She attended Our Lady of Sion School from 1967 – 1981 and was Head Girl in her final year before going to University College London to complete an honours degree in Maths. She then went to the College of Law in Chancery Lane, London to train as a Solicitor and worked for the solicitors firm Bolton and Lowe in the Temple, London before returning to live in Worthing.

Gill Buqué attended Sussex university, gaining a degree in Mathematics and Statistics and a Post Graduate Certificate in Education. Her 5 children all attended Our Lady of Sion Senior School.

Gill has worked as a professional statistician but her main interest and work has been in the area of Mathematics education. She is a very experienced teacher and has held several senior roles within schools and colleges, focused on A level teaching. Gill has also authored several A Level text books.

Steve Callaghan gained a joint honours degree in French and German at the University of Durham followed by a PGCE.  He taught English as a Foreign language in Munich, then returned to the UK to teach in Surrey. He has worked in both the comprehensive and independent sectors as a teacher, Head of Department, Head of Year and Deputy Head, including in a Catholic comprehensive school where he also taught RE. He gained an Advanced Diploma in Educational Studies and the NPQH before becoming Head of an independent girls’ school for eight years. Steve is the author of GCSE German material published by Thomas Nelson and Sons and was an ISI inspector for several years. He has delivered in-service training to Surrey teachers of MFL, at GSA conferences and in Sri Lanka and was the external examiner for the Modern Languages PGCE course at St Mary’s University, Twickenham for four years. Steve is a practising Catholic and is married with two adult children.

Dr Sue Coldwell is a Consultant Paediatrician and Fellow of the Royal College of Paediatrics and Child Health working for the last 21 years at Worthing Hospital.  Her specific interests are school health and school aged children with additional needs, Paediatric Diabetes and Palliative Care. She is involved in Safeguarding of children up to age of 18 years and also provides teaching and clinical supervision for medical students and doctors in specialist training as well as nurses and allied health professionals. She was a module leader for MSc for both Child and Adolescent Diabetes and Social and Professional Networks in Child Health Modules at Brighton and Sussex Medical School (2002-2010).  She has previously been a Governor to George Pringle/Palatine School (1988-2003),  John Horniman (ICAN) School (2001-2003) and Trustee of St Barnabas Hospice (1997-2004) and Chair of Steering Group for Ashdown Children’s Centre (1998-2005). She was involved in the setting up of Chestnut Tree House Children’s Hospice and  currently provides medical cover. She was also a Founder Public Member of Royal Marsden Foundation Health Trust. She is married with four children and three grandchildren.  Her youngest two children attended Our Lady of Sion School from Nursery to Sixth Form and her twin grandsons attended Nursery before moving to London.

Andy is a Professor in the School of Ocean and Earth Science at the University of Southampton, where he teaches and undertakes research in environmental geology and geochemistry. He is also a Director of Internationalisation, co-ordinating the School’s strategic international links. Having originally studied oceanography, he graduated with a PhD in Geology from Southampton in 1994, and has since worked at various UK Universities (including the Universities of Sussex and Brighton) before rejoining Southampton in 2016. Andy is a Fellow of the Geological Society, the Royal Geographical Society, and the Society for Environmental Geochemistry and Health, and is a member of the Geohazards committee of the UNESCO International Geoscience Programme, which focuses on international geoscience capacity building and sustainable development.

He lives in Worthing and is married with two sons, who both attended Our Lady of Sion School. He has particular interests in University and science outreach, and supporting students through the school-to-university transition.

Jane Dahill studied Law at Edinburgh University, qualifying as a Scottish solicitor and becoming partner with Pagan, Osborne and Grace in St Andrews. Following a move to England, she re-qualified in English Law, working in Worthing as a Family and Child Care Solicitor advocate until 2014. She retired from full time practice at the end of 2015, providing holiday and maternity cover until Summer 2021. Outside of work, her interests include a revived interest in painting and drawing, providing after school care for her grandchildren and walking her dog.

Lucy Hammond Iles joined the Governing Body at the start of 2018.  Lucy also attended Our Lady of Sion as a pupil from 1981 to 1995 before going to Royal Holloway, University of London to complete a Geography degree.

Lucy qualified as a Chartered Accountant with RSM (formerly Baker Tilly) in 2003 before returning to Worthing in 2007 where she joined Kreston Reeves (formerly Spofforths LLP).  Lucy is now Senior Manager specialising in the ‘Charity and Not for Profit’ sector at Kreston Reeves.

Anthony is currently working as Associate Director & Senior Architectural Technician for a firm of architects & interior designers in Shoreham.
He works on a wide range of construction projects, including private owners, housing developers, commercial buildings and the hospitality industry. Antony previously worked for a practice who were retained Architects for a school in Brighton and Seaford.
Antony has fond memories of Sion as a child when his mother worked at the school. Waiting for her in the library, he discovered the books of grand ancient Greek and Roman buildings, which triggered his interest in Architecture.

Gary has worked in various senior technology roles over the last 30+ years, most recently as Senior IT Director (Chief Technology Officer) for a leading international financial company. He has had a successful career delivering technology services and IT transformation using a variety of solutions, based in Paris and responsible for IT services delivered globally across 28 countries.

Gary has previously been a Governor and subsequently Chair of Governors for an early years’ school in Cumbria and was Chairman of the British Scouting Association in Paris. A keen sportsman, he has coached rugby to juniors.

Roger joined the Civil Service after the completion of his A Levels and was an Examiner in the Office of the Official Receiver in Company Liquidation for 10 years.

He then moved into private practice, working for nearly 20 years for a large international accountancy and business advisory firm.  He retired in 2016 from his position as a Principal in the Business Restructuring Group, advising individuals to Blue Chip Companies.

Since retirement, Roger has worked on occasional consultancy projects and remains as a member of R3, the professional body for Insolvency and Restructuring Professionals and also the British Property Federation Insolvency Committee.

Roger is married to Elizabeth, a Borough and County Councillor, and their daughter attended Our Lady of Sion School from Nursery to Year 11. Roger’s interests are mainly environmental and he is a member of the Sussex Wildlife Trust, the Wetlands Trust and the Sussex Badger Trust.

After 16 years teaching geography and a variety of humanities subjects in secondary schools in South-East London and West Yorkshire, Steve Joined the Advisory and Inspection Service, initially in Bradford Metropolitan Authority, the London Borough of Southwark and then West Sussex County Council as a geography adviser. For a short period during this time, he taught part-time on the BA (QTS) course at Goldsmiths College. In parallel to his advisory work he was a member of the Geographical Association, chairing their Assessment and Examinations working group and also the Geography Advisers and Inspectors Network (GAIN). More recently, due to a re-focus of local authority work, Steve was part of the County’s Leadership and Governance group, in particular providing developmental support and training for governing bodies in the County’s schools.

Having been a keen sports player in the past, Steve’s interest is now as a spectator, mainly of rugby in the winter and cricket in the summer.

Amit attended Cranfield University, gaining an MSc in Mechanical Engineering with specialisation in Aero Space. He works for Thales UK where he heads up Technical and Product Lines Strategy for a particular business sector. He has more than 30 years of International Management experience in engineering, business development, bid & project management, R&D and Product Line Strategy. His core competencies also include Transverse & multi-cultural, multi-national co-operation & Business Management.

He is married with two children and lives in Goring. His daughter attended Sion and achieved significant results to complete an Honours degree in Psychology at University of Birmingham.

In his spare time Amit enjoys walking and travelling around the world with his wife and enjoys spending time with family & friends at home.

Elaine is a highly experienced Religious Studies teacher with extensive knowledge of delivering and examining GCSE and A Level courses.

Elaine studied at St Mary’s University College where she gained a BA in Theology and Religious Studies and then a PGCE in Religious Studies. She returned several years later to undertake an MA in Catholic School Leadership.