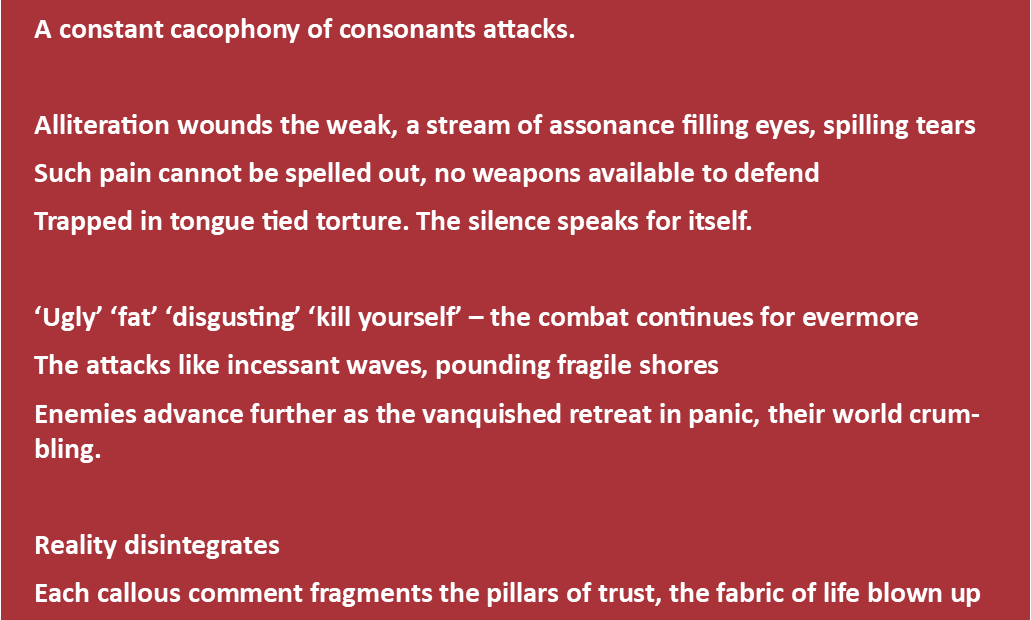 We are so proud of Year 11 student Flora who has just won the Senior Category of the ISA Poetry Competition.
Author Steven Camden who judged the final round of the competition says of her poem:
“Holy smokes. This was stunning. So much to unpick. I can feel the thought and feeling that you have poured into this. Amazing”
Here is her poem.

Another name in the firing range, a target in sights, distant confrontation

Like a drone strike, with fingers on the trigger

A volley of vicious vowels, sadistic sibilance to cut deep in thick skins

A constant cacophony of consonants attacks.

Such pain cannot be spelled out, no weapons available to defend

Trapped in tongue tied torture. The silence speaks for itself.

‘Ugly’ ‘fat’ ‘disgusting’ ‘kill yourself’ – the combat continues for evermore

Enemies advance further as the vanquished retreat in panic, their world crumbling.

Each callous comment fragments the pillars of trust, the fabric of life blown up

They caress the grenades resting in their hands, cradling the newfound power

Tyrannical possibilities lie before them

A war of words lingers. A pained frontier moves forward.

Hurt channelled through the barrel of a gun, charged in a phone screen

Those loading the cannon felled by its recoil, all shattered by shell shock

Locked in an eternal spiral of isolation

Free in a twisted release. Warped healing from the chasms of reality.

Sorrow and guilt, or the fear of retribution, brings about search for appeasement

And the liars’ excuse – ‘Me and my big mouth’

A distorted insult hangs in the air, though silence clings on like a lonely survivor

Discarded to the backs of minds. A new target is set.