We are thrilled to announce that our Year 8 student May has won the BBFC Maleficent: Mistress of Evil Black Card competition!  She was presented with her award by Joe Rocco from the BBFC during a special assembly this morning much to the delight of her fellow students!  Her design will be shown before every showing of the new Disney film – May and her mother have headed to London today to attend the premiere. 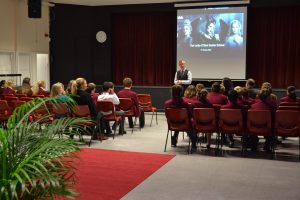 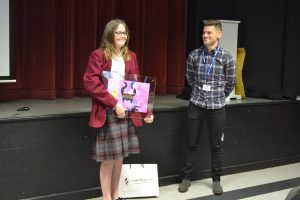 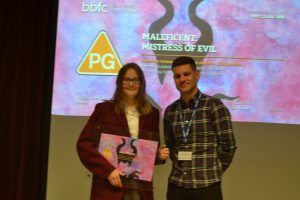 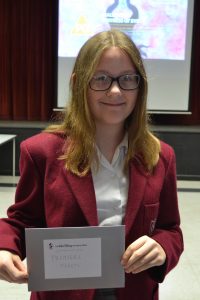 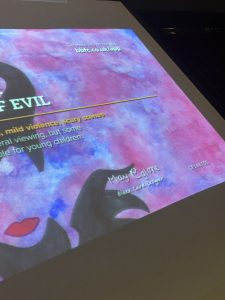 Winning entry to be seen before every UK screening of Maleficent: Mistress of Evil

After receiving more than 900 entries, the British Board of Film Classification (BBFC) is delighted to announce that May McGlone, a year 8 student from Our Lady Of Sion Senior School, Worthing, is the winner of the BBFC Black Card competition.

The competition, launched on the CBBFC website and BBFC social media channels this summer in partnership with Disney, asked children to design the BBFC Black Card for Disney’s fantasy adventure sequel Maleficent: Mistress of Evil. The black cards were judged by the BBFC education team and CEO and President.

After much deliberation, the judges were able to narrow down all of the fantastic entries to a final 10. However, May’s design, showcasing the iconic Maleficent horns on a vibrant hand coloured background, wowed the judges who reached a unanimous decision.

Lucy Brett, Head of Education at the BBFC, said: “We are delighted by the wide reach of the competition and the way it has inspired so many children – and hopefully their teachers and parents – to think about the BBFC age ratings and our iconic cards and symbols. We also hope it has generated discussion about how and why we offer ratings information that can help children choose well when deciding what films and shows they want to watch in cinemas, at home and online.

May’s winning design has been adapted to include the age rating symbol, ratings info and signatures seen on the iconic BBFC Black Cards. The Black Card will be shown before every UK screening of Maleficent: Mistress of Evil in cinemas across the UK.

As part of her prize, May will have the opportunity to walk down the red carpet alongside the star studded cast of the film at the London premiere on Wednesday 9 October. She will be one of the first people to see her winning Black Card featured on the big screen.

Dr Simon Orchard, Headmaster at Our Lady of Sion, commented on May’s success: “We are so proud of May’s design for Maleficent: Mistress of Evil’s Black Card and are delighted that she has won first place in the competition. She is a talented young person and it is wonderful that we can celebrate her achievement with the whole school community in assembly.”

Charlotte Tudor VP Studios Marketing, Disney & Animation, Walt Disney Studios EMEA said: “We’ve been thrilled to support the BBFC in their programme to educate children on the reasons for film ratings through our major Autumn release, Maleficent: Mistress of Evil.  Maleficent has clearly sparked great creativity as proven by the impressive quality and volume of entries. We look forward to hosting May at our European Premiere where her winning design will be unveiled for the first time on the big screen.”

Lucy Brett added: “The interpretations were wide ranging and inspiring to us – really showcasing how much excitement watching movies in the cinema still holds for children. We would like to thank everybody who entered our competition and are excited to see the design made into the Black Card for Maleficent: Mistress of Evil!”

The BBFC education team reach almost 10,000 people and visit 150 schools a year conducting seminars and visits and talking to children, teachers and parents about age ratings, navigating the online world and choosing content well. They also provide a variety of resources for teachers and parents including free classroom posters and PSHE resources created in association with the PSHE Association.