A magical Christmas arrives in Reception

To great excitement, a mysterious box recently arrived in the Reception class. Unwrapping the beautiful box, the children were rather disappointed to find that, other than lots of magic sparkle, it didn’t contain anything else.  Who had sent it?  Why was there so much sparkle inside? Who was the little person seen running away?

The children arrived the next day to discover a crime scene. With magnifying glasses and clipboards in hand and wearing special hats and shoes so as not to contaminate the evidence, the children turned detectives and began to look for clues.  A trail of sparkle led to a little door, knocked over chairs and a tiny toadstool.  Then the children discovered a letter from Santa and a tiny elf hiding in the classroom!

The arrival of the elf, whom the children have named Cheeky, has instigated all kinds of activities.  Letters to Santa have been written and, after Cheeky had a snowball fight, the children have had to count all the snowballs into numbered pots.

Christmas has definitely arrived in Reception! 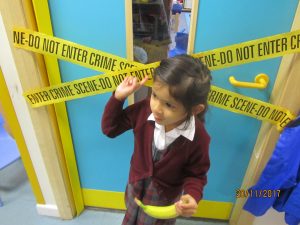 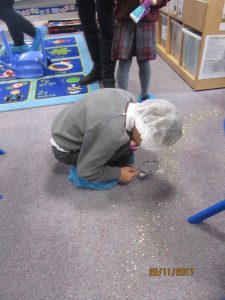 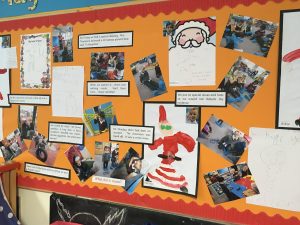